Novitas BKK looks back on a long tradition and is now one of the largest company health insurance funds (Betriebskrankenkasse) in Germany. Its roots lie in the beginning of the 19th Century, when Alfried Krupp founded the "Krupp steel factory auxiliary health insurance fund" for its employees. The original idea of a community based on the principle of mutual solidarity for all insured persons still plays a major role in Novitas BKK’s mission today. Many well-known company health insurance funds such as those of Thyssen Stahl or Gruner + Jahr have joined together under the umbrella of the Novitas BKK. In 2010, the company merged with ktpBKK. In the wake of the merger, the desire for a single telecommunications infrastructure arose. A cross-site, convenient VoIP system was realized with the innovaphone solution.

The merger of Novitas BKK with ktpBKK brought together not only two companies but also two PBX infrastructures. As is often the case, this resulted not in a uniform system, but in a heterogeneous jumble of different manufacturers and systems. As a result, the features that were commonly available could only be used in a restricted way or not at all. In addition, the rental costs of the old system were high - these were all reasons that forced those responsible to consider a new telecommunications infrastructure.

A system specification was then created, which included the following items:

- the new VoIP communication system should cover the growing demand for additional extensions
- it should also allow for hardware and software extensions in the long term
- the total cost as well as the costs for the management of the system should be reduced
- user mobility should be increased (as well as providing flexible and mobile internal and external workplaces)
- cross-site telecommunications infrastructure; open industry standards
- maximum availability
- contemporary, modern workplaces
- brought together in one convenient VoIP / ICT system
- encryption (including any network and any device)
- smooth migration, taking advantage of existing IT components

The project had been tendered across Europe and the company, effexx, which offered the innovaphone solution, won the contract. There were two particular challenges in connection with the order being placed: on the one hand, the entire new installation had to be completed in a time frame of max. 5 months; on the other hand, the individual sites had disparate networks from different providers, partly with Network Address Translation (NAT).

Installation and technical architecture of the solution

Novitas BKK has its headquarters in Duisburg, and, at that time, a second large location in Essen. There were also 35 medium-sized and small offices with approx. 5-90 employees, all of which were to be integrated in the new VoIP Unified Communications system. Across all locations, some 1,000 employees were to thus be equipped with a VoIP solution.

An innovaphone IP6010 VoIP gateway was installed as the central system at the Schifferstrasse headquarters in Duisburg. A virtual image of the innovaphone VoIP solution was installed in the existing VMWare environment. This created an additional level of security. The connection to the public trunk line (ISDN) took place via 5 separate S2M gateways. This meant that even if individual trunk lines were to fail, customers would still be able to get through to Novitas BKK.

The existing call centre system was connected to the main system in Duisburg.

In Essen, an IP6010 VoIP gateway was set up as a so-called slave. Therefore, it was possible to obtain full redundancy with an additional, redundant PBX system - the IP6010 in Essen takes over all of the functions if the system in Duisburg fails. The vast number of smaller sites were also set up as "Slaves" and thus also offer maximum reliability. There are other, very small branches that are equipped only with an IP phone and have no own trunk line connection. Employees have an IP phone, fax extension number and Call Centre Agent software at every workplace. Thus, accessibility is ensured even in exceptional situations.

The installation of the new innovaphone solution took a total of 5 months. Meanwhile, there were no significant problems, but the fact that the networks at the different sites came from many different providers, thus requiring extensive coordination, proved to be comparatively time-consuming. 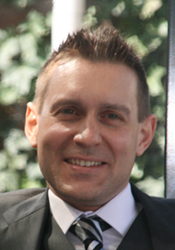 Initially staff had to deal with a "luxury problem" – they had to get used to the improved voice quality, which was initially sometimes considered to be disturbing. Once the G. 711 codec was enabled, this problem was eliminated. The rather light-weight and slender receivers on the innovaphone IP222 telephones also took some getting used to for some employees. Compatible USB headsets provided the solution for the employees in this case. The central administration and maintenance is one of the main advantages of the innovaphone system. Marc Illbruck: "We can act quickly as we have direct access to all parts of the system. The administration is completely different than our old system, but easy to understand and practical."

The expected economic benefits of the new solution are also visible. The cost of the replacement will have been redeemed in about 3 years after the acquisition.  The company is playing with the idea of integrating other innovaphone UC applications into the infrastructure in the future. They definitely intend to integrate more sites into the infrastructure within the scope of future mergers.