You are here:     Company Our Customers District Euskirchen

Mobility and Working across Different Locations with innovaphone myApps

The district administration of Euskirchen, just South of Cologne in Germany, comprises 1,000 employees at multiple sites. When the decision was made to update the existing telephone system from an outdated hybrid system to a modern IP PBX system, those responsible chose a future-proof communication solution from innovaphone. One of the decisive factors that tipped the scale in favor of the innovaphone solution was the possibility of installing the new system during ongoing operation without any downtime. 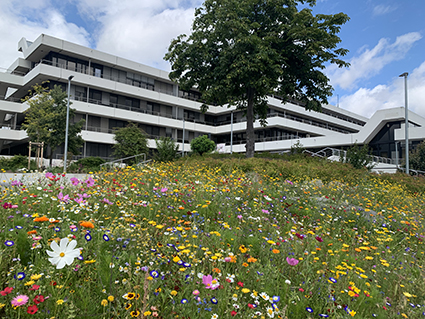 More than 200,000 inhabitants belong to the catchment area of the district administration of Euskirchen, whose main site is in the district town of the same name. The communications infrastructure both in Euskirchen and at the smaller administrative sites had to be replaced as the existing hybrid telephone system had become outdated. Solutions by several well-known manufacturers were scrutinized, but it was the recommendation of the consulting IT system house, Decker Communication, which brought innovaphone into play. “The innovaphone PBX with myApps was exactly what we were looking for. A few months after the meeting, we opened a new property with approx. 15 employees, which we equipped with innovaphone as a pilot project”, explains Andreas Kautz, project manager at the district of Euskirchen.

Smooth Migration to the New System without Interruption

The new telephone system fully met expectations and shortly afterwards the responsible manager decided to also equip the employees at the main site, approximately 700 in number, with an innovaphone IP telephony and UC solution based on an innovaphone IP6010 VoIP gateway. Above all, the fact that it is possible to install the new PBX system during ongoing operation by looping in the innovaphone VoIP gateways ultimately tipped the scales in favor of the innovaphone solution. “This point was very important for us. We wanted no interruptions in our communications, even during the installation process of the new system. We also wanted to implement the changeover to the new system gradually, i.e. as a so-called ‘soft migration’.” Andreas Kautz emphasizes, “This was easily possible with innovaphone”. Meanwhile, all administrative sites in the district of Euskirchen have been integrated into the innovaphone communication infrastructure.

Particularly at the beginning of the pandemic, another advantage of the innovaphone PBX with myApps became apparent: From one day to the next, a large number of employees had to start working from home. This was simple and easy with Home Office by innovaphone. The range of functions and the usability of myApps are always identical, regardless of the location and device - whether the user is on a smartphone, notebook or home PC - therefore employees did not have to change their habits despite having to change location and they could maintain their accustomed work processes. myApps combines all necessary applications on a uniform platform – video telephony, video conferencing, chat, mobility, presence and fax functionality. “Not to mention the wide range of administration options,” as Andreas Kautz points out. “With myApps, IT administration has various devices at its disposal which allow the communications infrastructure to be managed and configured remotely – an invaluable advantage, especially in times of working from home.” Kautz has one final conclusion to make, “Things created by humans may contain flaws. Therefore, we are extremely satisfied with the new innovaphone system.”