You are here:     Company Our Customers ERBER Group

All Company Sites Globally Integrated into the innovaphone PBX

The ERBER Group is an international group of companies in the field of food and feed safety with headquarters in Getzersdorf, Lower Austria. The leading group of companies has a sustainable corporate culture with some 1400 employees at 50 branches across the globe. The heterogeneous communication infrastructure has now been replaced by a modern, uniform innovaphone IP telephony and UC system.

With over 50 sites worldwide, from Panama to Cambodia, from Brazil to China, the ERBER Group comprised a number of very different communication systems. Some came from a well-known French manufacturer while others were PBXs from local providers. The size of the individual branches is also very varied, ranging from small offices with 5 employees to large sites with up to 300 employees.

Once it became apparent that it would be difficult, from a technical aspect, to convert the existing telephone system to IP, especially at the smaller sites, the decision was taken to switch to a new telephone system with the aim of linking all company sites across the globe via existing VPN connections and integrating all employees into one uniform numbering plan. A system specification was then drawn up to define the additional requirements for the new system. These requirements included: 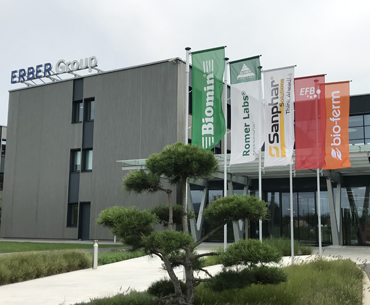 The fact that the innovaphone PBX was the ultimate favorite compared to other systems available on the market was mainly due to the fact "that innovaphone enables a simple network to be set up. This solution allows the individual systems to be set up as stand-alone systems and the troubleshooting options are outstanding," explains Andreas Hahn, Team Leader IT Infrastructure at ERBER IT Service & Co KG. The responsible managers also appreciated that the innovaphone PBX allows the individual PBXs in the branch offices to access their own trunk lines independently of each other by using separate VoIP gateways.

The internationality of the ERBER Group and the disparate branches across the world brought several technical challenges for the installation of the new innovaphone PBX. On the one hand, the entire installation process had to be carried out during ongoing operations and without disrupting the existing telecommunications infrastructure, which meant that the old system and the new system had to be operated in parallel. On the other hand, the local conditions at various sites posed challenges for the IT team: Some sites only have very limited bandwidth, e.g. in Vietnam, Cambodia, Brazil or Panama. The types of connections also differed, with the spectrum ranging from analog to ISDN and SIP in some countries. And last but not least, the telephone behavior of employees in the various countries also differs; for example, telephone features that are important in the USA are different from those in Europe.

The rollout of the innovaphone system was carried out in several steps. The first innovaphone VoIP gateway - an IP6010 - was installed at the ERBER Group headquarters in Getzersdorf. 35 additional company sites were integrated into the innovaphone infrastructure step-by-step over a period of two years. Before the first rollout, the ERBER Group IT department received training from the IT infrastructure specialists of ACP Holding Österreich GmbH, a partner company of innovaphone AG which was in charge of the project. The configuration of the new innovaphone PBX was then mostly carried out by the in-house IT department. ACP technicians were only called in to deal with special requirements, such as routing. The innovaphone PBX was realized using various VoIP gateways depending on the size of the site: from the large IP6010 with up to 60 conference channels to the smaller IP811 and IP311 VoIP gateways for smaller branches. innovaphone IP29 analog adapters were also installed to integrate analog devices such as faxes or door openers. innovaphone IP64 DECT phones and IP1202 base stations were integrated into the IP infrastructure at sites requiring robust DECT telephones - for example in production environments or warehouses.

innovaphone IP112 IP telephones were installed at employee workstations. With their large color display and 16 function keys, they provide a high level of convenience for telephony. innovaphone IP222 design telephones with add-on modules, are used at reception desks, winner of the "red dot design award: product design" prize. The myPBX app is available for employees who need to be mobile so they can be reached anywhere, anytime and on any device (smartphone, tablet) and provides access to many UC functionalities such as voicemail. The ERBER Group has acquired a total of 1,222 innovaphone UC licenses.

In response to the question of whether and in what form problems arose during the installation process, Andreas Hahn answers: “All in all, the installation of the new innovaphone system was surprisingly simple and trouble-free. We only experienced some minor difficulties related to local conditions. In Brazil, for example, the local telephone connection could not be configured because the interface parameters provided by the provider were not adequate. The close cooperation with innovaphone support paid off here: Joint troubleshooting resulted in a software being made available which contained the necessary parameter points. In China we were faced with the problem the innovaphone PBX could not be delivered. The two sites in China in particular continue to present us with challenges. The innovaphone hardware cannot be purchased there directly and it can’t be imported as the CCC certificate is missing. We will have to find a solution to this.”

Overall the ERBER Group is very satisfied with the new innovaphone solution. Andreas Hahn sums up: “Above all, the voice quality is really good, also overseas where we have latencies of up to 300ms and low bandwidth.” The IT manager is also enthusiastic about the administration and maintenance of the new telephone system: “The old system and the new one are worlds apart. The old system meant some company updates still had to be imported via serial ports. Administration was only possible with an outdated application. That isn’t the case with innovaphone: We can save lots of technician hours because the configuration and maintenance of the innovaphone PBX is easy and requires far less time. Our administrators appreciate the new, extensive possibilities that it offers.”