You are here:     Company Our Customers Flury

Flury Stiftung opts for a modern IP solution by innovaphone

Several retirement homes in Prättigau, the crèche in Rätikon and other health facilities are united under the umbrella of Flury Stiftung, the foundation based in the Swiss canton of Graubünden. Some 460 people are employed at the health provider’s seven sites. The realisation of a new hospital building in Schiers was the impetus to exchange the communications infrastructure for a sustainable, future-oriented system, namely the innovaphone IP telephony and UC solution. 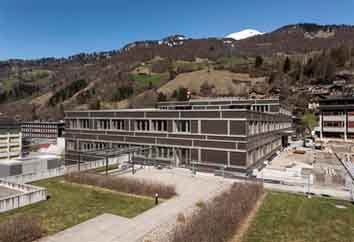 Founded in 1881, the Spital Schiers is one of the oldest hospitals in the canton of Graubünden. It is a hospital with 24-hour emergency operation 7 days a week. This includes all central in-patient and out-patient health care medical offerings. In 2015, the clinic building was opened after two and a half years of construction. Both the power supply and the IT infrastructure have been designed according to modern criteria. A specification catalogue including the following items as used to select the future communication system:
- Smooth migration of the existing system, gradual migration of individual departments to the new building
- Ensure ongoing operation, 24/7 in a critical environment (emergency calls, alarm server etc.); highest possible availability
- Administration possible by the internal IT department; it should be possible to manage relocations, personnel changes and minor enhancements internally
- Desktop and cordless phones with an interface to patient/nurse call and thus the alarm server
- Integration of an external medical practice.
After evaluating the solutions on offer, the decision fell in favour of the innovaphone PBX, which had been offered by the Swiss ICT system integrator, swisspro. One important point was the fact that the innovaphone solution had already proven itself in a comparable reference project, the Spital Scoul hospital in Lower Engadine. Moreover, the requirements defined in the service catalogue were best filled by the innovaphone solution and it was also interesting in economic terms. Christoph Anhorn, project manager ICT at swisspro, explains: "The solution by innovaphone was a perfect fit for the customer’s needs and requirements."

Installation and architecture of the new communication solution

Due to the fact that it was a new hospital building, the technical requirements that would be useful for a future-oriented communication solution could be created from the outset. New power over Ethernet wiring was laid and divided into VLAN (virtual local area network) segments. Work was also needed in the old hospital building’s network in order to harmonise the existing and the new wiring. An innovaphone IP6010 VoIP gateway was installed in the hospital’s data centre, on which the innovaphone PBX also runs. The innovaphone PBX’s Linux application platform was implemented for fax integration. The external medical practice that had to be integrated into the infrastructure, was integrated via a smaller IP800 VoIP gateway. innovaphone IP28 analogue adapters. were used for some analogue residents’ rooms in the nursing homes, as well as for additional analogue devices such as fax and analogue interfaces. Flury Stiftung decided on the innovaphone IP232 and IP222 design phones, that set new standards both visually and technically. A total of three IP232, 93 IP222 phones and four IP2x2 extension modules were delivered to Schiers. For trouble-free call management, the hospital relies on a modern, computer-controlled telephone switchboard, the innovaphone Operator. It enables convenient call management and provides a quick overview of inbound, outbound, parked and forwarded calls - definitely a huge plus point for user-friendliness in such a critical hospital environment.

An Ascom IP-DECT system, consisting of one Ascom UNITE alarm server, is coupled with the innovaphone PBX. The hospital’s and nursing homes’ nurse call systems ("nurse or “patient call”), a Leicom control system and another control system for fire, TUS-alarm and redundancy are connected to this Ascom IP-DECT system. The UNITE alarm management system that is used in the hospital in Schiers, sends messages, escalates and coordinates all emergency calls, monitors the entire system and reports errors promptly to the right user group. This alarm server forms the basis of a professional and reliable alarm system. If a patient operates the "nurse call” from his bed at night, this call is displayed by the nurse call system as an indicator light in the corridor and in the nurse’s station. At the same time, the call is also sent via Ascom Messaging to the night nurse on duty’s DECT device. The night nurse sees the room number and can directly connect to the patient’s phone by pressing a softkey. The patient’s phone is automatically switched to hands-free mode. This allows the night nurse to hear the patient and to communicate with him without the patient having to pick up the handset.

A simple and quite smooth roll-out

"For the most part, the entire roll-out was trouble-free and was carried out within a reasonable period of time, which was also thanks to the project partner, swisspro, being very well-prepared," comments Edi Philipp, project manager at Flury Stiftung. It was important that the ongoing operation of the hospital did not have to be interrupted during the transition period and that there were absolutely no outages in the communication infrastructure. While the preparation and the roll-out in the new hospital building took about 5 weeks to complete, the changes in the old building were carried out over a period of 1 ½ weeks. Initially, there were temporary problems with fax integration, but the manufacturer innovaphone and partner swisspro promptly and easily solved these: On the one hand, an update to the manufacturer’s new firmware version was arranged, while on the other hand, innovaphone developed a specific hotfix to solve the error. Claudio Rieder, head of IT/Telecom at Flury Stiftung confirmed: "The innovaphone system is reliable, easy to maintain and a bugfix was quickly made available to solve problems that arose."

Those in charge were particularly pleased by the fact that the internal IT Department can take care of managing the new solution: "Basically, navigation through the menus on the innovaphone devices is very easy. For us it is very positive that we can now have in-house expertise and can manage the system ourselves", confirms Edi Philipp. He continues: "We are completely satisfied with the new solution by innovaphone. Ease of use and scalability allow us to place our trust in innovaphone even in the future - especially in regard to more sites." The employees encountered no problems in dealing with the new phones - there was a high level of acceptance for the innovaphone devices thanks to simple, intuitive usability and good voice quality. Magnus Hidber, Deputy Director/Manager Services, confirms that compared to the previous solution, the innovaphone PBX “is excellent value for money”. In conclusion, he summarizes the company’s experience with the innovaphone system: "The new solution represents a clear improvement compared to its predecessor".