CNR Nanotec @ Lecce is a multidisciplinary centre for research and development in the area of nanotechnology. The activities of this centre are based on the use of new nanotechnology models and approaches in different contexts which range from basic testing to the development of newly emerging technologies, including applied research projects of industrial and social significance. The scientific and experimental activities take place in national and international cooperations with academic and industrial partners. These could be divided into four fundamentally thematic platforms: materials, photonics and optoelectronics, nano-biotechnology and innovative technical devices. The centre is supported by an extensive laboratory infrastructure, which is organised into seven bodies for the realisation of different activities. They range from the synthesis of new materials over the production of devices to the enhanced characterisation of materials, functional systems and devices.

When a relocation for the Institute for Nanotechnology in Lecce (Apulia, Italy), a part of the National Research Council (CNR – Consiglio Nazionale delle Ricerche), was impending, the necessity of completely renovating the network and telecommunications infrastructure emerged. Considering its own objective, coined by the development of the newest and most efficient technologies, it had always been of utter importance to CNR to have the best technologies available on the market for its own infrastructure and for the employees, especially in the area of business communication.

At this point in time, the nanotechnology pool of CNR in Lecce stretches over 12.000 m2 (≈14,300 yd2) in laboratories and facilities. More than 200 researchers are employed in different scientific fields: physicists, chemists, biologists, doctors and engineers. The goal is to attract scientists from across the world and to employ a growing number of brilliant minds. That is the reason why the innovaphone solution with its easy scalability and flexibility was the best choice for a new technological office with further growth potential. 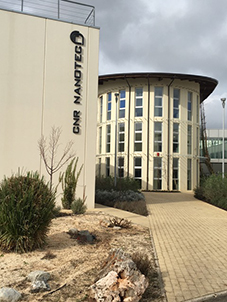 Due to previous experience with innovaphone at the general directorate of CNR in Rome, where an innovaphone PBX with currently 1500 subscribers has been in use for years, and with the Station Concordia, a French and Italian research centre in Antarctica, it was easy for CNR Nanotec to choose innovaphone as referential brand in the field of VoIP and Unified Communications and Collaboration.

Nanotec ultimately selected innovaphone because of the necessity to guarantee full manageability and flexibility while simultaneously optimising operating costs with the introduction of Unified Communications.

Following requirements had to be fulfilled by the new system in Lecce:

Nanotec’s entirely new infrastructure provided for the implementation of a completely new and efficient communication system. This system should be technologically up-to-date, and integrate smoothly into the already existing innovaphone solution at the headquarters in Rome. The infrastructure of the data centre in Rome has continually been kept up-to-date by innovaphone with new functionalities and safety features, which are guaranteed by innovaphone’s ongoing research and development processes. The new platform, which integrates both IP Telephony and Unified Communications functionalities of the innovaphone PBX, was used to ensure an advanced professional communication system.

As platform for the new system in Lecce, Nanotec uses a VoIP Gateway IP3011 that establishes connection to the public telephone network via a primary connection. Innovaphone’s communication system enables connectivity between different locations. Due to the so-called Master-Slave concept, everything transforms into one single ecosystem. The Master-Slave system of innovaphone’s PBX works like a tree structure which acknowledges the central PBX as the Master PBX. All other PBX within this tree structure are recognised as Slaves. Any further expansion of this treelike structure is registered on every single platform, be it as Slave or as Master. This is the reason why Nanotec’s location in Lecce is excellently connected, and due to the Master-Slave concept fully integrated into the system of the CNR headquarters in Rome. Contrary to other solutions, even in the event of connection failure, the Master-Slave configuration of innovaphone’s PBX does not cause degradation of services in any way.

A Slave based on the IP3011 platform is a suitable fit for the scenario at Nanotec because through the connection with the central system via IP in H323 through the ENUM protocol – either in standard or in CNR format- guarantees safety and encryption.  This makes the Nanotec system in Lecce fully self-sustained and ensures functionality also in the event of connection failure to the Master system in Rome. Even though configurations and licences are managed centrally, all operational functions remain maintained. This highly sophisticated system by innovaphone ensures Nanotec’s full independence from the CNR headquarters in Rome. Additionally, innovaphone’s partner Omniprotect is able to carry out remote maintenance and remote assistance of the system.

Nanotec selected innovaphone’s IP telephones IP111 and IP240, in addition to the high-end telephones IP232 in order to complete the IP solution. Analogue Adapters of the type IP29 further supplement the solution by connecting analogue devices (telephones and fax) and supplying the elevators.

Installation was speedy and smooth: with automatic provisioning of the devices, the quick and efficient innovaphone rollout system made it possible to activate the centre within two days and to secure safe registration by using advanced encryption. At the time of the interview, Gianvito De Iaco, in charge of ICT at the Institute of Nanotechnology in Lecce, expressed that “the employees of our centre are not only very satisfied with voice quality but also with the easy operation of the devices.” The graphic user interface with its user-friendly and intuitive operation has actually always been one characteristic feature of innovaphone’s devices. Installation was successful and the results were rated as very positive by De Iaco, responsible for ICT. “Compared to our previous communication solution, administration and maintenance are much easier and faster in any given situation.”   As far as economical aspects are concerned, „the solution has low administrative costs, even though greater functionality is guaranteed.”

Nicola Burchi, CEO and IT Manager of Omniconnect, comments that “installation mainly proceeded flawlessly, exactly as planned between Omniconnect and the customer. Follow-up contact with the customer later confirmed the initially expressed satisfaction of the system users.”