You are here:     Company Our Customers Ganter

Armani and de Beers, Nespresso and Luis Vuitton, Prada and Lindt & Sprüngli - the list of Ganter Interior’s reference customers reads like the Who is Who of international premium brands. The company, registered in the Black Forest, realizes room concepts to perfection on a global scale and according to the highest functional standards and at a splendid design standard. Some 350 employees work at Ganter in Germany, Switzerland, Italy, France, England, China and the US. At its headquarters, the company completed the modernization of its communication infrastructure in several steps, from a traditional PBX via an innovaphone VoIP system to a virtual PBX (IPVA). 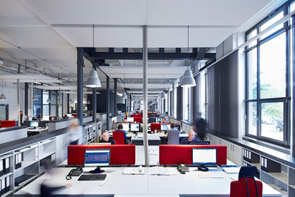 The starting position at Ganter Interior in Waldkirch was typical: The long-serving telephone system of a renowned manufacturer had become obsolete and was no longer able to fulfill the requirements placed on a modern communication infrastructure. Maintenance efforts were particularly high, manageability was unsatisfactory and the space and power required were outdated.

When setting up a new office in 2009, Ganter Interior had already opted for an IP800 VoIP gateway from innovaphone due to the existing infrastructure at the site. As the necessary cabling for a conventional connection to a PBX did not exist at this new location, and the company wanted to avoid laying new cables, the decision was taken to connect the new site via a VoIP solution. In 2011, Bechtle, the consulting system house suggested a full changeover to VoIP with the innovaphone solutions. As a result of this suggestion, a second office was switched to Voice over IP by coupling the existing traditional PBX with an innovaphone VoIP gateway - keyword “smooth migration”. In a second step, the already existing IP800 VoIP gateway was configured as the master PBX and a new IP1060 VoIP gateway was configured as the S2M access to the provider or trunk line.

The new infrastructure considerably reduced administration efforts. In particular, companies with multiple branches can draw significant advantages from the central administration of the innovaphone PBX because the PBX can be managed across multiple sites - encrypted and convenient via the Web browser. The different firmware versions of the phones were automated via the innovaphone update server, bringing all to the same version. The administrator can thus move subscribers somewhere else at a click of the mouse and set up all subscriber and device settings. Billing of the innovaphone PBX takes place centrally and is also easy and quick. Installing software is child’s play with the Wizard, a rollout tool supports the installation of the end devices and the integrated update server manages all the updates for device groups on the net centrally. Administration efforts could thus be reduced to a minimum also by using templates.

As modern Unified Communications applications in general and especially video telephony were to be made available at company headquarters, the newest innovaphone firmware was implemented and the innovaphone PBX was set up virtually as a software application. The innovaphone Virtual Appliance (IPVA) is installed in a VMware environment and comprises of the complete scope of service of the innovaphone PBX. The advantages of a IPVA solution: It does not require a third-party operating system such as Linux or Windows as it is set up directly on the VMware entity. This not only saves a considerable amount of time but also cuts costs. Meanwhile, the IPVA runs with almost 400 port licenses - in a very stable manner. Steffen Olbrich, IT manager at Ganter Interior is very happy with the reliability of the innovaphone solution. He comments: “We have never had a failure on the innovaphone hardware. It has been running for months without any problems.” And not only that: “From an ecological viewpoint, the innovaphone PBX is great. The components are made of robust stainless steel, do not radiate much heat and do not require any power-consuming fans. Thus, the new PBX really fits to our sustainable company philosophy.” Steffen Olbrich explains.

Ganter Interior is also opting for innovaphone VoIP gateways for connecting other German and international branches. The virtual innovaphone PBX in Waldkirch serves as the master PBX to which the other branches register. Local PBXs are located in Tauberbischofsheim, Osnabrück, Meran and Paris; and the innovaphone IP800, IP305 and IP302 run on these. The only exception is the Ganter sites in New York and Shanghai: These had previously been integrated into the infrastructure via a SIP connection, whereby the Shanghai branch has recently been equipped with innovaphone and integrated in the system. Now the complete extension is connected via a SIP provider to the master PBX in Waldkirch with an IP302 as the VoIP system and with a continuous SIP connection.

The complete changeover to SIP is also currently underway in New York. To date, the integration in the Ganter Interior VoIP environment has been realized via a single SIP connection. By the end of the year, a full VoIP connection via a local provider is expected to be realized based on an innovaphone IP302. As the responsible SIP provider in America has not certified the innovaphone PBX, the complete changeover to SIP has to be postponed. However, in order to be able to realize the connection to the switchboard Master PBX system, the existing telephone system is to be replaced in the first step by an IP38. The IP38 takes over the connection to the existing American analogue telephone network. The integrated SIP capability of the IP38 can be switched at a later stage to continuous SIP communication.

There is a flat numbering plan with transfer to the respective local trunk line across the entire structure. The Compact Flash card on the IPVA serves as the update, configuration and backup server. This approach has stood the test at far-off sites: The existing lines were only used for data traffic as this was unavoidable. Everything that doesn’t have to go via the lines, such as updates, is realised via Compact Flash cards.

While the changeover from proprietary systems with own, non-compatible bus systems and end devices to VoIP at the German sites was managed within 2-3 man days, the changeover proved to be somewhat more difficult especially in Italy, France and China. The existing line network often proved to be less than optimal and did not meet current technical standards, which meant calls dropped again and again and consistent reachability could not be guaranteed. “When a company migrates, it is generally necessary to realize that there could be some problems with the choice of provider, but these can usually be solved within a few days,” comments Steffen Olbrich. He continues, “It does not suffice to have excellent technology like innovaphone’s. The innovaphone system is easy to manage and has a broad range of functionalities. Configuration can mainly be done by the in-house IT department. However, at the end of the day, we still depend on the services of local providers and need to find out which requirements exist in advance.” Christoph Haberla, Head of IT at Ganter Interior is full of praise, “the good collaboration with the contractual partner Bechtle who was mainly responsible for the success of the installation bore fruit”.

All office workplaces at Ganter Interior are equipped with innovaphone IP200 phones for traditional telephony. Every employee has access to the central phone directory. Approximately 50% of the employees work with headsets. Furthermore, currently innovaphone Software phones are being tested at several sites, with Windows computers or notebooks serving as the business phone. The Unified Communications client myPBX serves as the user interface. If the tests prove to be promising, certain workspaces will be equipped with the innovaphone UC solution. Ganter Interior recently purchased 50 new innovaphone IP111 IP phones during the V.11 campaign. The topic of Unified Communications is also being driven forwards and new functionalities such as the innovaphone Application Sharing are being tested.

In general, Ganter Interior employees are very satisfied with the new communication solution. Daily work for the responsible administrators is also much easier with the innovaphone solution than with the previous system. “Admin work is much better. Routine tasks such as adding users, setting up call groups or mapping for certain numbers, automatic call forward to fax machines etc. are much easier and more convenient than before,” Steffen Olbrich underlines. The Hotdesking function brings the most flexibility as it enables the employee’s respective telephone extension to be transferred to the desk where the employee is currently working.

Thus the concluding summary on the innovaphone system is very positive. “The new system requires virtually zero maintenance. The hardware is basically failure-free,” says Christoph Haberla and continues: “From our experience we meanwhile know that: if innovaphone is written on the device, quality is guaranteed!”