You are here:     Company Our Customers International Airport Münster/Osnabrück

Airport Münster/Osnabrück (FMO) in Germany was established in 1972 and has been an excellent transportation link between the southwestern regions of Germany and parts of the Netherlands ever since. The airport consists of two terminals: predominantly one for domestic flights, and one for flights within Europe – 787,000 passengers were registered in 2016. After the existing telecommunications system had been in use for more than 15 years, the airport management resolved that it was time for a modernisation of the airport’s business communication based on an innovaphone PBX.

After 15 years of permanent use, the Linux-based server with IP components at the airport Münster/Osnabrück had served its time: connectivity of three S2m lines with approximately 800 phone numbers in total had been provided via three central distribution rooms with an old telecommunications cabinet system. There was no solution to connect softphones or special headsets. A solution by third-party providers for unified messaging was connected to the telephone system via numerous interfaces – it is safe to say that this was not a contemporary communication infrastructure for a modern airport.

A performance catalogue was compiled after the decision to implement a new telecommunications system had been made. This catalogue contained following essential requirements:

In addition to these requirements, a stretch of approximately 1000 metres of analog copper lines had to be bridged during the technical implementation. After all considered solutions had been evaluated, the innovaphone PBX was selected. Francisco Rodriguez, CIO of FMO Münster/Osnabrück GmbH, comments on the determining factors as follows: “the innovaphone solution is contemporary,  very innovative and it saves space. All requirements are met and a solution viable for the future has been provided. The effective Redundancy Concept of the innovaphone PBX was also an important aspect for us.”

Implementation of the New Solution – More Mobility and Flexibility 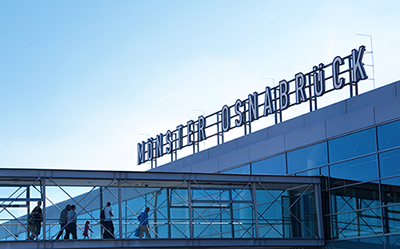 Switching to the new IP Telephony and Unified Communications solution took approximately six months. Since airport operation had to continue without impairment, “smooth migration” was chosen to ensure transition to the new solution step-by-step. The analog connections were partially replaced with IP connections. These were exchanged at over 30 distribution rooms, and built into the 19” distribution cabinets. All S2M lines and every single phone number were transferred to the new system. Transition from analog to IP was enabled with innovaphone VoIP gateways IP800, IP810 and IP1060. The VoIP gateways simultaneously constitute the hardware platform for the innovaphone PBX software.

The Analog Adapter IP28 integrated non-VoIP capable end devices such as fax machines and door intercoms into the IP infrastructure. The existing end devices were replaced by modern innovaphone IP telephones IP110 and with the models IP222 and IP232, with a large color display and touchscreen (IP232), which belong to innovaphone’s design line. The desired integration of headsets and softphones was realised fast and seamlessly with the innovaphone PBX. The Windows computer functions as a telephone with innovaphone’s Software Phone, and you speak through a USB headset. The connection via bluetooth or DECT with innovaphone’s Software Phone guarantees much more flexibility for the airport staff than conventional end evices.

“Mobility” is not only the core activity of the airport FMO but this term has also gained importance concerning the infrastructure: irrespective of the end device placing the call, the person contacted will always see one and the same phone number on the display. It was possible to keep the already existing four digit phone numbers despite transferral to the new system. This ensures that the airport’s staff members are available with the exact same extension number anywhere and anytime. innovaphone has expanded this One Number Concept to smartphones with the IOS and Android app developed in-house. Smartphones are thus capable of functioning as mobile extension lines of the innovaphone PBX.

Installation of the new solution proceeded very smoothly. The only technical issues that arose were connected to the wiring system of the airport: the long analog CU lines caused technical complications. However, these issues could be solved by increasing the previously existing 48 voltage.

The new telephone system convinces especially with its administration and maintenance: “due to the web-based solution and quick rebooting, operating the system on an administrational level is very easy. Maintenance is also fairly simple so that our maintenance costs were cut in half“ , says Francisco Rodriguez. The economic and technical expectations were fully met by the innovaphone solution and Mr. Rodriguez draws a positive conclusion: “The new IP-based telecommunications system integrates seamlessly into our one-net concept. From this point onwards, telecommunications and IT will not only run parallel to each other anymore but instead, they will be connected sensibly with each other. This has led to optimisation of many processes in this area.  New possibilities of the innovaphone system are “discovered” continuously  and, consequently, new methods are integrated in order to improve or modernise older processes.”