You are here:     Company Our Customers Hengstenberg

The name Hengstenberg has stood for culinary specialities and strong brands such as KNAX gherkins, Mildessa sauerkraut or Altmeister vinegar for more than 140 years. The family-owned company based in Esslingen, in South Germany, has more than 500 employees at multiple sites with its company headquarters in Esslingen and production sites in Bad Friedrichshall and Fritzlar as well as a branch office in Wels, Austria. The new innovaphone IP Telephony and UC solution ensures a highly available branch concept as well as a modern, efficient communication system.

As is often the case in a company with a long tradition and dynamic growth, Hengstenberg’s company infrastructure was extremely heterogeneous: The Bad Friedrichshall and Fritzlar sites had conventional telecommunications systems, which had already been discontinued by the manufacturer. It was hard to find replacement parts and maintenance was becoming critical. The company’s headquarters in Esslingen had an existing IP-PBX from a well-known manufacturer that on the one hand was expensive to maintain and operate and, on the other hand, only provided limited functionality. Furthermore, the system could not be administered by the in-house IT team as was the case in Bad Friedrichshall and Fritzlar. System management had to be outsourced to an external partner company, which led to additional costs. Above all, the system lacked modern applications, such as the integration of mobile end devices, Anywhere Workplace functionalities and UC applications such as Application Sharing or Conferencing.

The catalog of requirements defined by the IT managers comprised in detail: 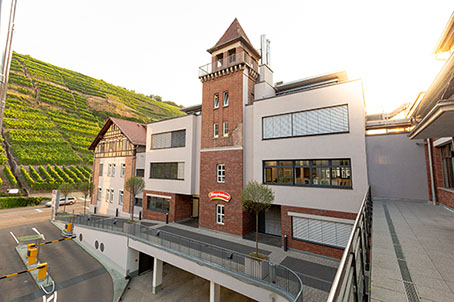 After IP systems from several well-known manufacturers had been inspected, the decision was quickly made in favor of the innovaphone PBX, which was offered by binder Systemhaus GmbH in Balingen. "The support provided by binder Systemhaus during the selection and installation phase was perfect and the solution offered - the innovaphone system - is functionally state-of-the-art and also has no problem covering complex requirements such as being the central point of integration for old mobile and DECT devices," explains Gerd Pfeiffer, IT Manager at Hengstenberg. Solutions from the other manufacturers proved to be much more complex in terms of installation and incurred much higher costs. In addition, the innovaphone PBX scored points by providing smooth migration, which enables uncomplicated integration into the existing infrastructure.

The switch from ISDN to IP at all Hengstenberg sites means that the company needed a new network with IP-capable wiring. Another requirement was that it should be possible to integrate existing DECT terminals, while also providing the technical prerequisites for replacing DECT in the longer term. Since many Hengstenberg employees have home office workstations, their integration should be as simple and functional as possible.

Two innovaphone IP3011 VoIP gateways were installed as Master PBXs in a redundant scenario at the headquarters of the family-owned company in Esslingen. If one of the two gateways should fail, the other takes over all functions immediately and without any losses, so that there are no failures in the communication infrastructure. To guarantee maximum security, innovaphone Reverse Proxy and innovaphone SBC (Session Border Controller) were installed. The latter supports all relevant security mechanisms and reliably protects the innovaphone PBX against attacks from the Internet. The innovaphone Reverse Proxy serves as the central security instance for all incoming connections from the Internet, especially in Anywhere Workplace scenarios such as those at Hengstenberg. This allows home office workstations and mobile devices to be integrated homogeneously and securely into the communication infrastructure. Two innovaphone IP29 analog adapters are used to integrate analogue devices such as fax machines or door openers. Employees at this food manufacturer use IP112 telephones and innovaphone IP222 design telephones.

The Bad Friedrichshall and Fritzlar sites are equipped with innovaphone IP811 VoIP gateways, which are connected to the company headquarters in Esslingen in a so-called Master-Slave scenario. Maximum reliability is also ensured in this case as the Master PBX takes over the functions of the Slave PBXs without any loss in the event of a failure at one of the branches. Integration of the DECT devices is also set up redundantly. Bad Friedrichshall and Fritzlar act as respective backup systems for this. Each branch has an innovaphone IP1202 DECT gateway to extend the innovaphone PBX to cover DECT-compatible subscribers. At Hengstenberg, the IP64 DECT end devices are mainly used in production environments. Initially, there were problems with the integration of existing DECT terminals with regard to audibility in the noisy factory environment. However, according to Gerd Pfeiffer, "These were analyzed and remedied at short notice in cooperation with innovaphone".

In addition, the company has a central data centeer at an outsourcing partner in Eislingen. The Linux application platform as well as reporting, fax server, central storage, update server and central LDAP database query run here.

Among the 500 user licenses Hengstenberg has installed, 250 are UC licenses. The innovaphone UC solution is used throughout the Company headquarters as well as in the office area. "All UC users work with the myPBX app, innovaphone Conferencing, Presence functionalities and Application Sharing a lot of the time. Chat is used according to needs - in the offices, it is popular and used frequently, while employees working shifts prefer email”, explains Gerd Pfeiffer.

In terms of work convenience and efficiency, "The innovaphone telephony solution is a giant step forwards," emphasizes Gerd Pfeiffer. In particular, application integration, the use of Softphone and UC applications and the smart integration of mobile devices significantly simplify daily work processes. "Our employees like to use the software solutions when travelling to different sites and they can make phone calls via wifi and their mobile phones while on the move. Many functions that used to be hard work can now be performed in the simplest way, such as setting up a video conference," explains the IT manager.

The in-house IT department is enthusiastic about the innovaphone solution. On the one hand, the installation effort was very tightly limited: just one or two days were needed for each of the three sites, not least due to the excellent preparation by the project partner binder Systemhaus. The ‘Plug-and-Play’ requirement, as defined in advance in the catalog of services, was thus fully met. Managing the new solution only requires minimal effort. All sites can be managed centrally or even de-centrally”, explains Gerd Pfeiffer. Significant savings for maintenance costs were achieved. In contrast to the former system, most of the work can be carried out by the company’s own IT department, an external outsourcing partner is no longer needed at the company headquarters in Esslingen. Further expansion of the innovaphone solution is already planned. Gerd Pfeiffer concludes: "Our economic and technical expectations have been fully met. UC has made its way to Hengstenberg."