A distributor with its own development and production capacity: ALBIS PLASTIC GmbH from Hamburg is one of the market leaders in the field of speciality plastics. Albis has an extensive international distribution network and a workforce of about 1000 employees at 26 locations worldwide. A modern innovaphone system with UC integration replaced the old hybrid system.

As the outdated hybrid telecommunications system was causing more and more technical problems, ALBIS PLASTIC decided in favour of a new, IP-based solution. The company reviewed various VoIP systems by major suppliers before finally going for the innovaphone system, as it "convinced us with good value in terms of price and quality as well as the system’s innovative technical design. Especially the fact that the solution does not require additional servers is a clear advantage over comparable systems," Dr. Markus Söte, Senior Director IT and authorized signatory at ALBIS PLASTIC GmbH states. 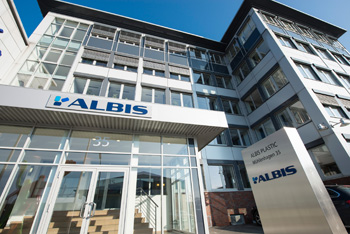 Anne Muth from the system house, trizwo, which had been commissioned to implement the project, explains: "The latter point in particular is one of the key strengths of the innovaphone solution. The network can be extended by adding new or existing locations without any problems. Staff members from different locations can now collaborate easier as participants in the local network can place internal calls, chat, exchange instant messages or change and view the presence status free of extra charges." At the same time, all branches are using the same components with the same software, which makes the administration of the innovaphone PBX particularly easy.

Before implementation of the new solution could take place, however, some technical preparations were necessary. This mainly refers to parts of the internal network that needed to be modernised and enabled for power-over-Ethernet solutions. The ALBIS PLASTIC GmbH headquarters in Hamburg already had a structured LAN cabling environment, while the other locations - there are six further locations in Germany overall and 20 more around the world - are connected to the headquarters via an MPLS network with bandwidths ranging between 2 and 10 Mbit.

In Hamburg, two innovaphone VoIP Gateways IP6000 were implemented as the innovaphone PBX, based on a master-standby configuration. This ensures that all functions are smoothly taken up by the other system in case of failure (failover). The smaller locations were linked to the headquarters via innovaphone IP800 VoIP Gateways, based on a master-slave configuration. This also ensures that all functions are taken over by the other system in the case of system failure - and this worldwide! Lotus Notes and a Caesar CTI solution are integrated in the overall system and available at all locations. Phone calls between the individual locations are either placed via public telephone services or - at neutral cost - via MPLS (Multiprotocol Label Switching). innovaphone technology was implemented from day one at one new production site in Asia. Depending on the location, the transition to the new solution took between 8 and 48 hours, including the integration of the end devices.

The company thus provides all employees with a modern telecommunications solution with cutting-edge applications. The integration of Caesar CTI enables instant calls to be started from any application with just one click. Calls can be received, terminated, forwarded and toggled via mouse-click, and it is easy to set up conference calls.

Some of the employees’ end devices are equipped with headsets, which renders the work routine easier and more comfortable.

Overall, the implementation of the innovaphone solution went extremely smoothly. "All of the important issues were already recognized and eliminated during initial test runs. There were merely some problems at the beginning with some of the DA-converters for analogue devices," Dr Markus Söte summarises. The employees are generally very happy with the new system. The improved availability of call lists, the central phone directory and the UC applications meet with particular approval. With regard to maintenance and manageability, the transition has clear advantages: "In contrast to the old system, we can now manage the system ourselves. This makes us much more flexible," Dr. Markus Söte adds. In response to the question whether the new systems fulfil the technical expectations, he replies: "Yes, we were especially able to solve technical problems with the assistant-manager solutions thanks to the transition. The networking of the other locations also works very well. We are altogether very happy with the new system."