The Ostfriesische-Flug-Dienst GmbH (OFD) is one of the oldest airlines in Germany and was founded as a private company in 1958. The focus in those days was to deliver newspapers to the East Frisian islands. Today its fleet encompasses 8 aircraft that carry passengers several times a day across the Wadden Sea and its spectacular landscape. OFD is a subsidiary of the shipping company Aktiengesellschaft "EMS", which has also been operating the ship line service from Emden to Borkum and to the East Frisian islands for more than 175 years as well as from Bremerhaven and Heide-Büsum to Helgoland. 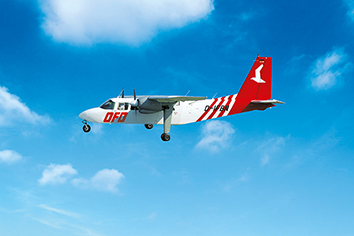 After the airline’s existing telephone system no longer met the requirements of a modern communications infrastructure, the decision was taken to invest in an innovaphone VoIP solution due to its scalability and the optimal way in which sites are interconnected.

There was nothing unusual about the initial situation at OFD: An old conventional PBX had to be taken from the network and was replaced with a modern communication system. After the large telecommunications company that had previously been the first point of contact for OFD in terms of corporate communications was not able to offer a future-oriented, SIP-based solution, the company looked into VoIP telephone systems from other manufacturers. The IP specialist from Sindelfingen, innovaphone, was shortlisted as it was the only vendor able to convincingly demonstrate that its solution could cost effectively and flexibly connect smaller sites with different infrastructure, heterogeneous technical requirements and different bandwidth (All IP, ISDN, etc.). Furthermore, innovaphone demonstrated in a plausible manner how easy it would be to extend the system to become a company-wide solution for AG EMS with 32 primary multiplex connections. Another very important aspect was the high reliability of the innovaphone PBX. The ships as well as the flight operations at AG EMS run in almost any weather situation and in high winds, and the company expects the same stability and high availability of a new communication system. Ralf Wurpts, IT project manager at OFD mentioned one other reason why the decision was taken in favour of innovaphone:  "Having direct contact to the manufacturer was considered very positive, and we were happy with the individual consultation and planning."

A catalogue of requirements was drawn up in close cooperation with the local system house, Sandersfeld Sicherheitstechnik GmbH in Leer, which has 30 years of experience in the field of security technology. OFD’s system specifications with regard to the new telephone system included the following points:

The present day company has been through many changes since the original company was incorporated under the name of Ostfriesische Lufttaxi – Dekker und Janssen OHG in November 1958 in Emden. With the increase in air traffic, the fleet has been extended and modernised continuously. Today, the company has five aircraft of the type Britten Norman Islander, a Gippsland Airvan GA8 and a Cessna 172. OFD’s flight operations, as well as AG EMS’ ferry operations are vital not only to enable life on the island to run smoothly. For those living on the islands, it is the only connection to the mainland and includes the delivery of mail, medicines, emergency care for sick patients and food supply while also forming the basis for the flourishing tourism on the islands.

The new innovaphone communication infrastructure means that various branches of OFD can be equipped individually in line with actual needs and yet still remain optimally interconnected with each other. The innovaphone product range has VoIP solutions for a wide range of requirements. At OFD’s main site in Emden, an innovaphone IP811 VoIP gateway is being used with up to 10 voice channels. innovaphone IP411 VoIP gateways are located at various airfields in the District of Cuxhaven, the East Frisian area and in the District of Pinneberg, and thanks to the intelligent master-slave concept, they reliably perform their loyal service in all weather. An innovaphone IP24 analogue adapter is used to integrate analogue devices such as faxes in the company infrastructure. The company chose innovaphone IP112 IP phones, so-called all-round phones suitable for both telephony and unified communications applications, which have a USB interface for headsets and a Gigabit Ethernet port. OFD also chose to implement the innovaphone design line phones: The IP232 have a touchscreen and large colour screen as well as excellent voice quality and a bold look.

Further expansion in the near future 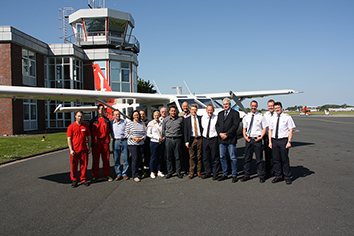 In answer to the question of how much time it took to install the new VoIP solution, Ralf Wurpts explains: "The installation was completely preconfigured, so that the real start took just a few hours. There were absolutely no problems." Only, the managing of the infrastructure was "not entirely intuitive". Ultimately a training course by the manufacturer quickly solved the situation. The employees who work with the new devices are also very satisfied. Ralf Wurpts says: "Voice quality of the innovaphone devices is outstanding and our expectations have been fulfilled 100%". And Michael Bannasch, project manager at Sandersfeld Sicherheitstechnik GmbH, adds: "For us as a new innovaphone partner, it was a positive experience to work closely with the manufacturer, innovaphone, in this project and to successfully implement the solution for our customer AG EMS." AG EMS already has plans to expand the innovaphone VoIP solution across the company, and that speaks for itself: the customer is satisfied.